It really bothers me that…

Oh look. The penguin needs a life jacket too. *facepalm*

… Oswald the Octopus can’t swim and needs a floatie in the water. Because, hello! He’s an octopus. Granted he’s blue and wears a little black hat and sounds like Fred Savage and has a dog that’s literally a hot dog with a tail. And, yes, I get that he’s teaching little kids about water safety yada yada. But, y’know, even a three year old can grasp the concept that an octopus is different from a person, and doesn’t need help swimming in the water since that’s where octopuses live. Also, must he look both directions five times before he crosses the road, every single time? And so s-l-o-w-l-y too? Again, I get it. Teaching safety, etc. But talk about disrupting the dramatic momentum of the narrative. Yeesh.

… Max and Ruby is apparently a cartoon about two little orphaned rabbits. Seriously, where are the fricking parents? They’re not referenced once, not even in passing. At least in Charlie and Lola and Stella and Sam, the kids talk about their parents even if they never appear on screen. That’s fine. I get it. Parents are boring. These shows are all about siblings relationships. But Max and Ruby is just freaky — two small kids apparently living alone in a large, over-furnished, hideously upholstered house. No wonder Ruby’s an over-controlling, OCD mess and Max speaks in monosyllables. Not to mention that monumentally useless grandma of theirs who drops in for tea and ice-cream and then vamooses, leaving Ruby to cope all alone. And as if all her duties of feeding, bathing and cleaning up after Max weren’t enough, Ruby also takes on babysitting jobs, watching other little rabbits whose parents, ironically enough, are very much  present and accounted for. I tell you, that Ruby is heading for a nervous breakdown.

… every building in the Peppa Pig universe is perched precariously on top of a ridiculously steep hill. I mean, why? What purpose could that possibly serve? Imagine the strain on the brakes on all the vehicles, since they need to park constantly on the almost vertical slopes of said hills. Not to mention the hazards of having little kids like George running down these slopes. And don’t even get me started on the stupid sloping gardens on the sides of the hills. They should just switch to terraced gardening or something.

… a ten-year-old boy in Paw Patrol apparently has endless income, access to fancy vehicles (including hovercrafts, helicopters and ATVs), and high-end electronic  systems, not to mention a ridiculously ostentatious tower with a glass-enclosed elevator and giant computer screens, used solely for discussing his ‘rescue missions’ with his pups. Why doesn’t anyone find it creepy that this kid, who apparently has no family, lives with a bunch of pups? What’s his source of income? How is it legal for him to be driving any vehicle on the roads (let alone his hi-funda All Terrain Vehical)? And why does Adventure Bay have absolutely no policemen or firemen or rescue personnel apart from the weird millionaire boy and his talking pups?

… cartoons such as The Hive  and Ben and Holly turn fleas and ladybirds into ‘dogs’, complete with the panting and barking and stick-fetching behaviours. Repeat after me, cartoon makers: fleas and ladybirds are NOT dogs. They’re bugs. As such, they behave like bugs. They don’t bark. They don’t play fetch. Not every pet needs to be canine-esque. Get over it, seriously.

I’ll let you know when I do. Until then… stop using a floatie in the water, Oswald! 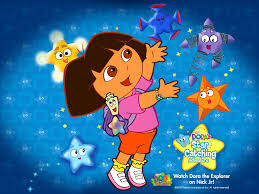 1. Granddad: Where are your bangles?

Disha: I don’t have my bangles. *pause* I only have my arm.

Me: Disha! Please sit down!

Disha: Not by the hair of my chinny chin chin!

Disha (standing in front of a shut door): Abre! abre!