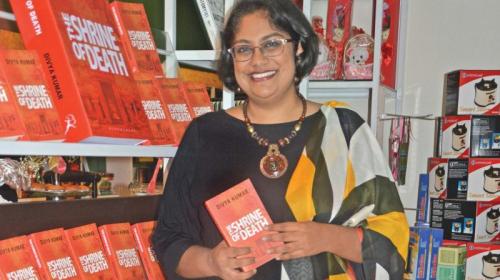 The journalist and author Divya Kumar has come out with a thriller ‘The Shrine of Death’. The book had a vibrant launch on Friday in the city.

The protagonist is a young woman, Prabha Sinha who is an IT professional in Chennai who is plunged into the netherworld of idol theft, murder and betrayal. Things start happening after she receives a mysterious phone call one night from her old friend Sneha Pillai. She seeks the help of Jai Vadehra, a troubled young man with a tragic past. She also seeks the help of the gorgeous DSP Gerard Ratnaraj of the Idol Wing, CID to whom she is irretrievably drawn towards. As the story unravels, she keeps on finding answers. Their search takes them from Chennai’s newsrooms and universities to the abandoned sepulchral shrine of a Chola queen in the heartland of Tamil Nadu.

The author took almost three and half years to finish the story. And since idol thefts had become common, especially after the robbery of 2008 by an international ring of idol thieves, she finds a cool focus point for the book.

“The story is purely an out and out entertainer with some romance, some paranormal elements”, said the author while explaining the subject matter of the book on the occasion of its launch. She hopes that people would enjoy the book picking it up on the airport or reading on a journey or while curling up by the poolside in the summer. A sequel to ‘The Shrine of Death’ is already in the process, according to the debut author.

The original article appeared here in the Deccan Chronicle.

Filed under Fiction, Media coverage, The Shrine of Death, Uncategorized