Article: Of Chennai, idol theft and a crime-thriller 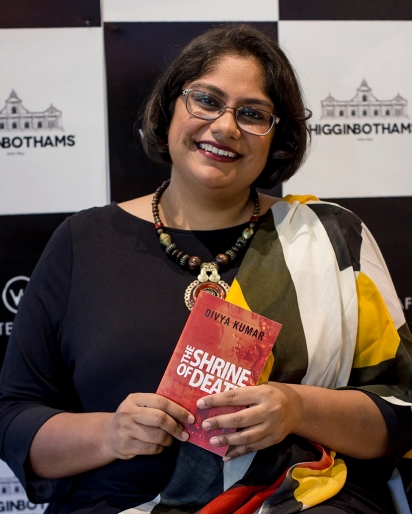 My book and I… at the launch 🙂 Photo credit: Shuchi Kapoor @girlinthegalli

A few years ago, reportage of the Chennai police department exposing a series of idol thefts planted an idea in the mind of journalist Divya Kumar. That transformed her into a debutante author with The Shrine of Death, a racy crime-thriller novel on the idol theft theme, set in Chennai.

At the launch of her book on Friday, Ms. Kumar, spoke of how much she enjoyed writing about places like Kamarajar Salai and T. Nagar.

“I grew up in the Middle East and went on to study in the U.S. But during my stint as a journalist with The Hindu for six years, I got to know the city well. Chennai is not getting featured enough [in mainstream popular fiction]. There is too much of Mumbai and Delhi; we need more of Chennai,” she said.

In conversation with novelist and playwright Shreekumar Varma, she reminisced about her time with The Hindu and said the job was a fascinating one indeed, giving her opportunities to meet different people and taking her several places.

“It was like learning from the best laboratory. It helped me go from I-want-to-be-a-writer to being a writer,” she added.

Mukund Padmanabhan, Editor, The Hindu, who launched the book, said, Ms. Kumar lent a certain positivity when she had worked in the paper.

The original article appeared here in The Hindu.

Filed under Fiction, Media coverage, The Shrine of Death, Uncategorized