How to (not) use band-aids, toddler-style 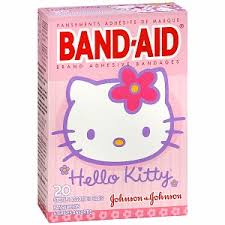 1. Demand band-aid for non-existent boo-boo. The operative word here is ‘non-existent’. The vociferousness with which a toddler demands a band-aid is inversely proportional to the actual need for the band-aid. Tiny bumps, barely-there scratches, invisible ant bites… and your toddler will clutch at the (supposedly) injured limb and pitifully ask for her Dora/Hello-Kitty/Princess band-aid. “I need it amma!” she’ll cry, “please, please, please!”

Of course, you give in because you can’t take the whining, and because these band-aids are just a more expensive version of stickers at the end of the day. At least  she uses the band-aids just one at a time; with stickers, an entire entire sheet is dispensed with in 4.3 seconds flat.

So you put on the band-aid, and there is peace and quiet as the child admires it and declares she is much, much better. You may even receive a hug for being such a wonderful ‘band-aid doctor’, and if your kid’s into Doc McStuffins, a rendition of the ‘I feel better’ song. She’s happy, you’re feeling pretty pleased and all iz well… for about 5 seconds. Then your toddler will…

2.  Demand to have the band-aid removed. Why? Why, if you love these band-aids so much, do you need to get them off so fast? Wouldn’t you want your pretty Hello Kitty band-aid to stay on for longer? You whined and whined for 15 minutes to have it put on, and now you can’t keep in on longer than 5 secs? What is the point?

So, anyway, you give in again, because this is not a battle worth fighting. This is a band-aid she didn’t even need in the first place, so why bother arguing about how long she should keep it on? Of all the random, un-winnable arguments one gets into with a strong willed toddler during the course of the day, this falls under the ‘whatever- I don’t care’ category. Yes, the stupid Princess band-aids were expensive, but, you know, whatever.

Then, of course, your toddler will…

So you remind your toddler of how you took it off just the other day, and of how you were so good at it because you’re the best band-aid doctor ever! It won’t hurt at all, you promise, it’ll be over in seconds. She says nooooo! So you get impatient and say, fine keep it on. To which she says, nooooo! So you finally take matters in your own hands and ruthlessly rip it off. Ouch! That wasn’t so bad, was it? Only 20 minutes of your life you’ll never get back.

Now let’s fast forward ahead to a day or two later when your toddler will….

4. Refuse to put on the band-aid when it’s actually needed: So your baby has fallen and hurt her knee pretty bad. Or she needed a blood test and has sobbed her way through the whole procedure. You remember how much she loves her Hello Kitty/Dora/Princess band-aid and offer it to her as an incentive to stop crying. As a way to make her happy. Anything to bring a smile on her face. And yay! For once, the darned cartoon character band-aids are actually needed! They’re going to serve a purpose beyond cluttering the house and lying about here and there.

Caught up in the moment, you forget two important things. A) Your child does not like to put the band-aid over an actual injury. Those she likes to leave open, so she can pick at them and make them bleed B) You’ve forgotten what will transpire once you actually get it on.

5 a. Return to Step 2: You’ve gotten the band-aid on at actual injury!!! Score one for the Mommy team! Hurray! Or, you know, not. Because we now go straight back to No. 2, bypassing the joy and 5 seconds of peace and quiet at the end of Step 1 altogether. Because your toddler wants the band-aid to be removed. Now.

But it’s worse this time. Because she actually kinda needs it. You want her to keep it on for a bit. This is not an argument that falls into the ‘whatever, suit yourself’ category. You make deals. You offer incentives to keep it on. You remind her you’re the band-aid doctor.

Of course, two minutes later, you cave and agree to take it off. Only… she doesn’t want you to take it off. But she also does. And this time it actually hurts her for real when you do. And she cries and cries and looks pitiful.

5 b. Return to Step 1: So after all that drama surrounding removing the band-aid, you’d think they’d be off the favourites list, right? Wrong. Because the next time she sees Princess/Hello Kitty/Dora band-aids anywhere in the house or the store, she will demand that you put it on for her,  on the invisible boo-boo on her elbow, right now. Because: “I really need it, amma! Please, please, please!”

3 responses to “How to (not) use band-aids, toddler-style”